Can You Dig It? – Gopher Control 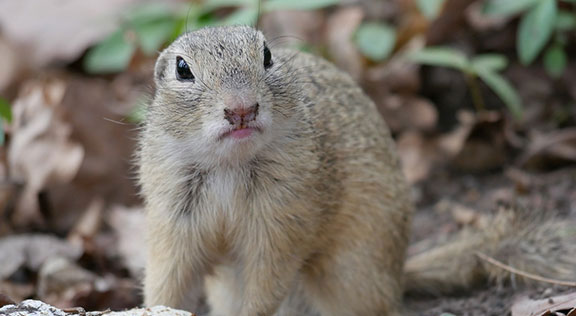 Gophers occupy a strange place in the American imagination. From old Warner Brothers cartoons to the Bill Murray flick Caddyshack, you’ve probably seen at least one adorable or endearing onscreen version of these tenacious garden pests. Yet in real life, gophers are stubborn burrowers who thrive on destroying your lawn, flowers, and vegetables. And it’s not just your prized rose bushes at risk: like a lot of other rodents, they can carry diseases such as rabies, and act as hosts for insects that carry other diseases as well. They also create serious risk for property damage. Unlike their cinematic counterparts, real gophers can be a real pain in the neck—and pose a serious risk to your landscape, home, and family. We’ve put together a gopher control overview on these digging disasters, and how you can encourage them to get up and go.

The most common variety of gopher found in California is the pocket gopher. These small, sturdy rodents are often confused with moles, but they are more robust. They live around three years, and are mostly solitary. However, in areas with plentiful food and water (such as your garden or vegetable patch), they can produce up to three litters of five to six kits a year, meaning lots of potential pests can be produced in a very short time.

Think you might have a gopher infestation? Let’s take a look at the facts:

Folk remedies for gophers abound, from leaving fish in their burrows to making a racket to drive them away. Unfortunately, these “cures” can be almost as unpleasant (if not more so!) than the problem itself for you and your family. Trapping, gassing, or otherwise driving away these stubborn little soil-pushers is rarely practical for homeowners, because the enormous, sprawling tunnel systems and multiple access points gophers create make it all too easy for them to escape your wrath until the threat is over.

If you think you’ve got a gopher problem, the best solution is to get in touch with your neighborhood pest control experts. A true gopher control expert can give your home and landscape a thorough evaluation to identify the extent of the problem, and the best solution to getting rid of the pests before they can do serious damage to your property. They’ll also work with you to formulate a plan to manage the burrow and help deter future reinfestation, giving you peace of mind as well as a happier, healthier lawn and garden.